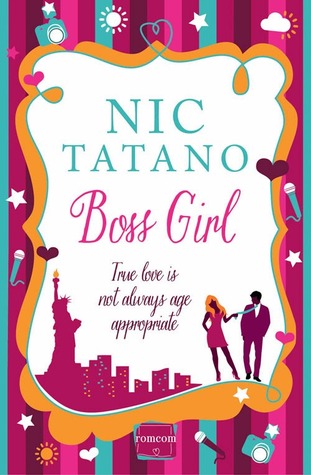 Boss Girl by Nic Tatano  was my Friday Read.  Last year I reviewed Wing Girl which I  loved so would I find Boss Girl as captivating? Here’s what it’s about:

Sydney Hack is the single, thirty something VP of news for a failing network… and she also has a taste for younger men.
She soon realizes a whole lot of over-thirty female viewers do as well, so she sets out to give these women what they want; a chiseled, trophy buck in his twenties sitting on the anchor desk next to a woman…
Just.
Like.
Them.
With nothing to lose she does the unthinkable; along with three female managers who happen to be her best friends she brings out the casting couch and turns it into a sleeper sofa. Doesn’t matter that the men have no television experience. As long as they look good. And there’s a hint of romance in every newscast.
Ratings skyrocket as a result, but Sydney and her female cohorts discover something else along the way…
True love is not always age appropriate.

After reading and loving ‘Wing Girl’ Nic Tatano’s first Rom-com novel last year I looked forward to reading ‘Boss Girl’ which in many ways is the antithesis of the first book.

Sydney Hack (great name) and her three cohorts are single-minded career women determined to make it in the cut throat world of television. Survival in an appearance orientated, ratings dependent industry has made all four women dominant and sexually aggressive. Despite her less than politically correct recruitment polices Sydney manages to improve ratings by using women over thirty on their  TV programmes with a much younger male co-anchor.

Boss Girl is a thoughtful foray into what goes on behind the TV screen. For maximum enjoyment don’t take this book too seriously. It is a tongue in cheek look at a power obsessed industry and the individuals in it who in some cases will go to any lengths for a headline.