For less than $1, you can read a great mystery romance this weekend. A Stone’s Throw will be 99 cents until Sunday, April 10th. Pick up a copy at this great price. Widowed librarian Alicia Fa…

Source: My Exciting Mystery Romance is on Sale This Weekend 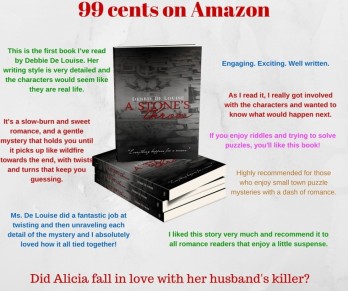 Did you always want to be a published author?

I’ve enjoyed writing since I was a young girl. My teachers and family encouraged me because they felt I had a talent in that area. When I was around 12, I got hooked on gothic suspense novels. They were very popular at that time. My two favorite authors were Phyllis Whitney and Victoria Holt. My dream was to grow up to be like one of them and publish a lot of books that appealed to a wide audience.

Are you a full time writer?

Currently, I’m a full-time reference librarian at a public library. I’d like to be a full-time writer one day.

How important is writing in your life?

That’s a tough question. While it seems I’ve always been writing in one form or the other (I’ve also written for magazines and newspapers), there have been periods when I haven’t made it a priority. At this point in my life, I’m planning to focus on it much more intensely.

I enjoy writing with my dogs Jazz and Oby by my side. Do you have any animal writing companions?

I have two cats, Oliver and Stripey, but I don’t consider them writing companions. They do, however, give me ideas for the pet characters in my book.

Do you have a special place where you like to write?

I currently work in my kitchen, but I’m hoping to create an office in another room in the future.

Is your writing process well defined or haphazard? Can you describe it?

I think you’re asking whether I’m a pantster or a plotter. I used to be a pantster meaning I did not take many notes while working and just allowed my writing to flow, but I’m learning that some outlining is necessary. I still pretty much let the characters and plot unfold for me as I go, but I do keep flexible plot outlines and character sketches.

What genre is your latest book ‘A Stone’s Throw’?

I wish I knew – lol. Actually, I had initially considered it a romantic suspense novel, but some reviewers consider it a cozy mystery. I enjoy reading both genres. I always like to include some romance and mystery in my books, but I don’t like to feature explicit violence or sex.

Can you tell us a little about it and what type of readers you think it would appeal to?

I think A Stone’s Throw would appeal to people who enjoy books that take place in a small town full of quirky characters as well as those who enjoy mysteries with twists and a bit of romance.

I’m intrigued by the synopsis for A Stone’s Throw’ and I am looking forward to reading it. Is this a standalone story or the first in a series?

When I wrote it, I thought it would be a standalone, but as soon as I finished it, I felt I could add more to the characters’ stories, so I wrote another one. I’m still not sure if it will be a series, but I am considering a third (the sequel is already finished. I am just editing and preparing it for submission right now).

What’s next for you Debbie are you writing another book at the moment?

I’ve written a sequel (possible #2 Cobble Cove book) that I hope to publish in the spring or summer.

I love reading as much as writing, but it’s tough to find the time to do both. I’ve always loved romantic suspense and mysteries. My favorite current authors are Nora Roberts and Mary Higgins Clark, but I do like to read new authors and try different genres, as well. I have a huge TBR pile and have also started to read fellow Limitless Publishing authors. I must say, I’m quite impressed by their writing.

Have other writers influenced your writing genre and style?

Definitely. I consider the many authors I’ve read my writing mentors and only hope I can bring as much enrichment and enjoyment to the lives of my readers as they have to theirs.

After her husband is killed in a hit and run accident, Alicia travels upstate to his hometown of Cobble Cove, New York, hoping to locate his estranged family and shed light on his mysterious past. Anticipating staying only a weekend, her visit is extended when she accepts a job at the town’s library.

Secrets stretch decades into the past…

Assisted by handsome newspaper publisher and aspiring novelist, John McKinney, Alicia discovers a connection between her absent in-laws and a secret John’s father has kept for over sixty years. But her investigation is interrupted when she receives word her house has burned and arson is suspected, sending her rushing back to Long Island, accompanied by John.

Back in Cobble Cove, cryptic clues are uncovered…

When Alicia returns, she finds a strange diary, confiscated letters, and a digital audio device containing a recording made the day her husband was killed. Anonymous notes warn Alicia to leave town, but she can’t turn her back on the mystery—or her attraction to John.

As the pieces begin to fall into place, evidence points to John’s involvement in her husband’s accident. The past and present threaten to collide, and Alicia confronts her fears…

Has she fallen in love with her husband’s killer?

Debbie De Louise is a reference librarian at a public library on Long Island. Her self-published romantic suspense novel, “Cloudy Rainbow” (Booklocker 2008) received an honorable mention in the Writer’s Digest self-published awards. She was awarded the Lawrence C. Lobaugh Memorial Award in Journalism from Long Island University/C.W. Post where she earned a B.A. in English and a M.L.S. in Library Science. A member of the Cat Writer’s Association, she has published articles in Cats Magazine and Catnip (Tufts University Veterinary Newsletter). Her short mystery, “Stitches in Time” was published in the Cat Crimes Through Time Anthology, (1999). She lives on Long Island with her husband, daughter, and two cats.

I’ll be reading ‘A Stone’s Throw’, shortly, so look out for my review here.