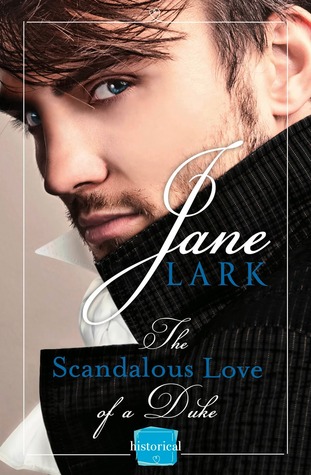 Isolated by life and choice, John Harding, the Duke of Pembroke, sees an angel in a pale mauve dress across a room and is drawn closer as lust grips firm and hard in his stomach.

The wheat-blonde hair escaping her dull dove-grey bonnet and caressing her neck lures his eyes to a spot he’d like to kiss.

She speaks with animation her hands moving. Then as if she senses his gaze the stranger turns and looks at him.

A rush of pain and longing spilled from Katherine’s heart into her limbs. It was so long since she’d seen John but her reaction was the same as it had been more than half-a-dozen years before. She loved him, secretly, without hope, but a chasm of years and status stood between them.

The Scandalous Love of a Duke is book three in the acclaimed Marlowe Intrigues. Moving forward to the next generation this is John’s story.

John’s vulnerability hidden by arrogance makes him a tortured hero so worth saving groomed from an early age to become the next Duke of Pembroke John’s life has always been about duty, pride and emotional detachment. With the incumbent Duke of Pembroke close to death John knows he must return from his extended Grand Tour and accept the role he was born to. Haunted by his barren childhood John would rather remain alone in Egypt among the tombs of long dead Kings but his life is not his to control and he bows to the inevitable and returns to England and his family.

Katherine is a wonderful heroine courageous and loving despite her inadequate family. Katherine loves John but knows her love will remain unrequited because she is the illegitimate daughter of a servant taken in by the local gentry but treated more as a servant than an adoptive daughter

John and Katherine’s sensual attraction is unexpected for John and rekindled for Katherine.

Katherine is John’s addiction but is the attraction physical or something deeper. Katherine knows she is playing with fire but she loves John and will give him anything whatever the cost to her reputation and heart. John knows Katherine has the power to heal him but will he sacrifice his pride and overcome his fears of rejection to let her? The love and support of John’s family is a recurrent theme in the Marlowe Intrigues and a stark contrast to Regency Society’s brutal prejudice and disdain.

Well paced and full of intrigue this beautiful emotional love story is full of passion, anger, misunderstanding and vulnerability.

I received and ARC from Harper Collins UK Harper Impulse via NetGalley in exchange for an honest review.

Check out my other reviews of the Marlow Intrigue Series : The Illicit Love of a Courtesan and

The Passionate Love of a Rake

The Scandalous Love of a Duke by Jane Lark