I love The Bad Boys series written by Susan Arden.

Girls Night Out -Bad Boys#4 is Cory’s story, the  baby sister of the infamous McLemore brothers .  Like all the novels in this series it is hot and steamy from the outset and definitely an Adults Only read.

Here’s what you can expect. 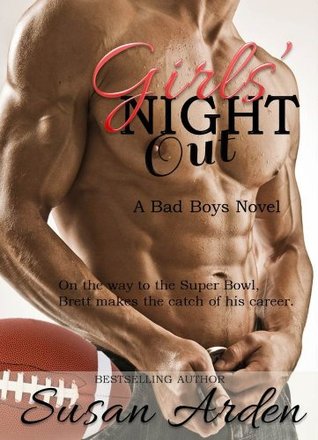 When Dallas Devils tight end, Brett Gold’s fiancée left him a year ago, he swore off getting involved with spoiled little rich girls. Brett became the ultimate bad boy on and off the field rather than deal with his personal life shot to hell.

Only a fool would tangle with the little sister of the McLemore brothers. So far all men with a lick of sense have left Cory McLemore alone. But now Cory is back from college and ready to party. This cowgirl crafts the perfect getaway to Dallas for a girls’ night out never suspecting the man she bumped into at the airport is about to become the missing link in her quest for a wild adventure. Cory quickly learns Brett is harder to walk away from a second time when she discovers the man beneath the bad boy persona is far different than she ever suspected.

One night with Cory has Brett scrambling. This NFL baller meets up with her family and it’ll take more than fast hands and fancy footwork to score points with the hardcore McLemore men. With seconds left on the clock, Brett isn’t about to let his Texas wildcat get away, not when she feels so damn good in his arms, against his body, and in his bed.

Barnes and Noble
My Review:

Girls’ Night Out book 4 in the Bad Boys series is Cory’s love story.

Cory’s protective family curtails her free spirit. She pushes the boundaries but doesn’t fly the nest and Texas until she’s twenty-one and once at UCLA flourishes despite her family’s initial misgivings.

Brett Gold is a Pro-Footballer who’s tired of the glitz and groupies. His glamorous exterior hides a man who fears injury will jeopardize his ability to care for his chronically ill mother and a broken heart since his fiancée married his best friend.

Brett and Cory meet at the airport as they wait to fly home for Thanksgiving he feels an instant connection with the young woman he accidentally collides with and longs to tame her sassy mouth, a fantasy his body is a willing participant in. Although brief they imprint each other and Brett is determined they will meet again.

They do in Dallas at Cory’s soon to be sister-in-law’s impromptu bachelorette party. Brett hones in on Cory as she queues for entry into Dallas’ premier club. He uses his influence to get them VIP entry in return for a slow dance.

Cory must be strong to withstand the emotional upheaval her mother’s illness causes. Maybe that’s why she takes a risk with her reputation and ends up in Brett’s hotel room after an indecently short acquaintance. Brett provides Cory with unexpected support when a family emergency make their tryst public property.

The sizzle and connection between Cory and Brett is electrifying but the fallout may damage more than their reputation. A jealous cousin, intrusive media and Cory’s insecurity and impulsiveness all make this a roller coaster affair.

Cory is strong but youthfully innocent. Brett loves her and is willing to let her make her own decisions as long as keeping him is one of them.
Girls’ Night Out is a red-hot read with deep emotional romance that makes it another memorable story in the Bad Boys series.

Girls’ Night Out by Susan Arden