‘The Passionate Love of a Rake’ overflows with sensuous Regency romance.The second in the Marlowe Intrigues this is definitely my favourite so far.

Robert the elder brother of Edward who we met in ‘The Illicit Love of a Courtesan‘ is the passionate rake. A dark, brooding man full of mystery is gradually unravelled by Jane the Dowager Duchess of Sutton, his first love.

This story oozes romance and heartbreak.

Jane’s story reveals the exploitation of women in Regency society. Finally free of her cruel, aged husband she finds his son determined to extract the fortune his father left her by whatever means he can.

The depth of the depravity Jane experienced combined with what she sees as Robert’s abandonment of her when she needed him most ensures the story is rife with emotional conflict.

Robert’s perceptions change as the story develops and he realises why Jane rejects him even if her body cannot.

The story is effortless to read, pure escapism with plenty of excellent supporting characters to hold your interest aside from the passionate romance between Jane and Robert.

The political nature of the society during this time is well described as is the indiscriminate censure it dealt out to those out of favour.

If you are looking for something to warm the winter evenings ‘The Passionate Love of a Rake’ is perfect.

I received a copy this book from Harper Collins HarperImpulse via NetGalley in exchange for an honest review.

The Passionate Love of a Rake by Jane Lark 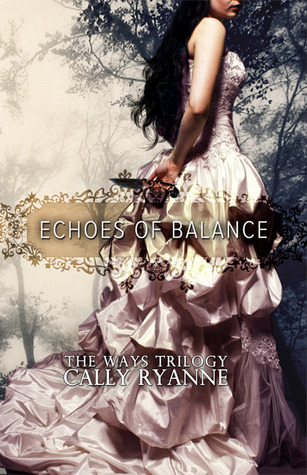 Today I am interviewing Cally Ryanne whose debut Young Adult novel Echoes of Balance will be released by Reuts on 17 December 2013.

Thanks Jane its great to be here.

What influenced your career choice as a writer?

I don’t really know if I can consider it a career choice; I have a minor in creative writing, but my day job has very little to do with writing (very little because, obvi, literacy is everyone’s problem). But that being said, I’ve been making up stories – and eventually writing them down – ever since I was little, so I think the whole full book thing was just an inevitable hold over of being an only child, or something. And I enjoy it, to boot – you should always do what you enjoy.

What would you like your potential readers to know about ‘Cally Ryanne’?

It’s a pseudonym! It has a blog! It enjoys listening to this one extremely well-trained Pandora station!

What inspired you to write your debut novel ‘Echoes of Balance’?

Chloe (and most of the other characters in Echoes Of Balance) have been with me for a really long time. Like, since I was 11-ish. They had A LOT of remakes between then and now, and a lot of tweaks to their ‘big story’ as I became more of an adult. I took a break from them towards the end of high school/start of college, but when I finally picked them back up, I felt like I was ready to finally give them the stories they deserved. Echoes Of Balance is the first book in Chloe’s story; there’s a few off shoots planned for other characters.

Where do you create your wonderful characters and stories?

Oof, nowadays? Mostly in my apartment. I have a great desk in my bedroom and I have a living room that hates WI-fi, so it’s a nice distraction free environment. When I was writing the first draft of Echoes of Balance, a lot of it was in my college art studio and also at my job. I worked at a place with a lot of downtime, so I’d plot in a notebook and then go home and write.

What is your favourite time of day to write?

Evening-ish I guess? Anytime is fine as long as I can get focused. I don’t do well in extremes – too early and too late and I just won’t be able to think straight.

Tell us a little about ‘Echoes of Balance’.

It’s book one of a planned trilogy that makes up the first half of Chloe’s story. Chloe is the youngest of the Naimei – an ancient line of people charged with keeping the universe in balance. The tasks can often be tedious, and as the youngest, Chloe is always stuck with the most boring tasks. She’s tried to rebel before by striking out on her own as a vampire hunter, but she always comes back to the fold – this time, just in time to help her family to prevent the return of Pan and Damonos, the original demons. At first, her family thinks the situation is – as most imbalances are to the Naimei – an easy fix. But then their Ways begin to fail and Chloe is approached be a debonair vampire named Josef who seems to know more about the situation than any creature should. It wouldn’t be a bad thing if the Naimei weren’t incredibly secretive, xenophobic, and slow to place trust in people. Chloe finds herself quickly led to a darker side of the supernatural, and she has to decide quickly if she accepts the help of the outsider at the risk of betraying her family in order to save the world.

As a new author have you any tips for other new writers?

Mostly, just stick with it. Be willing to rework. I’ve started writing stories about Chloe since I was a kid, and it took me over a decade to find the one that made sense for her as a character and the world she lived in and actually stick. Be willing to go back to the basics and strip everything else away. And if you get to the point of writing something you like, still be willing to rework it! I wish I had a screenshot of what my document looks like after a round of edits. It’s crazy!

Have you written any other books to be released soon?

I don’t know about to be released SOON but there is a draft of the second book in The Ways Trilogy underway and pretty heavy plans for books after that. There’s also a book already started about Maya, a minor character in Chloe’s story.

Where can your readers connect with you on social media?

I have a blog (ducanteoriginals.com) and a twitter (@callyryanne) and you can always get in contact with REUTS to get at me.

Where can we buy ‘Echoes of Balance’?

It will be available as a printed copy for order online as well as an e-book in most formats. Stay tuned to reuts.com for more details!

Add Echoes of Balance on Goodreads.

Thanks for visiting First Steps  today Cally. I am looking forward to reading Echoes of Balance and reviewing here on 18 December 2013.

Here’s the  Echoes Of Balance blurb:

For Chloe Moraine, fighting wild bears– and the occasional vampire– is a better pastime than the tediousness of keeping the universe in balance. But balancing is the family business. It comes with being one of the last in the ancient line of Naimei.

So when the impending return of the Original Demons threatens global harmony, Chloe is obligated to help. Even when that means the dull-as-dirt task of following a human girl who “might be involved, maybe,” instead of the thrilling hunt she craves.

With their powerful magic and ancient Ways, Chloe’s family is unconcerned, certain they’ll quickly fix the imbalance while she’s preoccupied with human high school. But when the Ways start to fail, the threat becomes more serious, and the only person that seems to know anything is a debonair vampire with an offer to help.

If Chloe chooses to trust him, and the darker side of the supernatural he represents, she’ll betray her family and risk losing them, and herself, in the process. But if he’s right, he may just be their only chance to stop the return of the Originals and save the world.

Maybe high school won’t be so boring after all.

Connect with Cally on Goodreads

Connect with Cally on Figment

Cally Ryanne is a vegetarian, with a serious avocado habit, in search of the perfect leather jacket. She graduated from a Midwestern art school in 2012 with a BFA in Drawing and a minor in Creative Writing, and then proceeded to do exactly what most art students do after graduation – nothing to do with art. She currently teaches math in New York City to a bunch of kids who call her “Miss.” In her spare time (between the day job and the night-time superhero persona), she writes, piecing together characters and stories that have been following her around since she was a child. She currently lives in uptown Manhattan with some awesome roommates – including her best friend from middle school – and a cat that can’t keep his tongue in his mouth. Echoes of Balance is her debut novel and the first in The Ways Trilogy, a Young Adult urban fantasy.